Living in a shed

I love my shed. It’s my own private world. Okay, it’s only about eight feet square with one window facing Half Moon Bay and a door to the back garden, but I can shut myself in here and not have to think about anything else. I’ve got a couple of comfy chairs in here and a small table and, of course, my record player (a Fergurson in a wooden case with a sort of grey leatherish lid. It’s five watts! You could buy an extension to plug in to make it stereo but I don’t have that.

In fact I’ve never heard stereo, the first time I hear a record in stereo is at my Swedish friend Mick’s flat on Euston Road. He puts on Yellow Submarine and it’s amazing, the voices moving across the room from left to right – or possibly right to left). Of course this is a long time ago and, my memory being what it is, which is mainly defunct, some of the facts may be wrong. But it’s my story and this is the way I’m telling it; think of it as a kind of unreliable biography.

But the shed is real – and the record player – and the window looking down to Half Moon Bay. 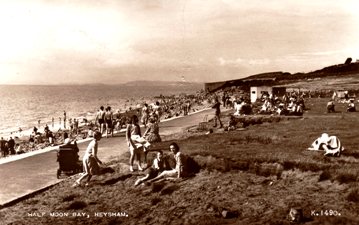 I’m not so sure about the comfy chairs and the table but they do give it a more homely feel. The walls were bare brick but I remember we (probably Steve and I but I’m not sure on this) did paint it to make it a bit more liveable in. I wasn’t actually living in the shed, just spending all my time there apart from when I was out at work or down in Steve’s cellar or sleeping (so yes, I more or less was living in the shed). My mum let me have it so that I could have friends in and listen to music without disturbing the rest of the family (I say my mum, not my mum and dad, because it was my mum who ran things, who made the decisions. My dad was a shift worker so was often either out at work or in bed, and when he was at home he was generally involved in one of his hobbies – collecting wildflowers, astronomy, wargames, stamp collecting, model making – he was a man of many interests). Our house isn’t a big house; it’s a small house in a terrace on a council estate and there are too many people in it! Apart from my mum and dad there’s my little sister Karen (who’s about eight or nine) and I think my older sister and her three kids were still living with us – she’d left her husband and come back home. Plus the dog, Laddie, a brindle (I think that’s what you call it when they have stripes) sort of greyhound, great dane cross. So with three adults, four kids, a dog and me in a three bedroom house you can see that there isn’t loads of room. Being a teenager I needed a room of my own so I had the box room, a tiny room with room for a bed and not much else. I had painted it – three red walls, one black wall and a black ceiling – to give it that nice, homely feel. Most of the walls were covered in posters, mainly of the Beatles, but the black wall made a useful blackboard. Steve and I were into making up long, elaborate stories with cringe-making punch lines which were just plays on well known titles or phrases. I remember one of Steve’s ended with ‘Darling, piston, they’re laying our gong’ (GROAN!) Here’s another (I know your’e dying to read it!) about three people in some sort of love triangle, ‘It was just the old external train mangle’. I have to say I think that was one of mine.

Prosecuting Attorney: My lud, I believe that these despicable creatures – pointing at the two  long-haired, cowering creatures in the dock dressed in bright satin shirts, red trousers (in the case of one of the defendants), and small rectangular sunglasses (in the case of the other), both with various scarves, bells and badges and smelling strongly of patchouli oil) – are guilty of criminally abusing the English language in a way which is likely to cause criminal distress to all right thinking Englishmen

Defense Lawyer: But look at them. They’re nowt but young lads. They didn’t mean any harm your honour, they were just having a bit of fun. Alright, it got out of hand, that joke about Her Majesty the Queen was definitely a bit much. But they’re good lads even though you can’t tell if they’re boys or girls. 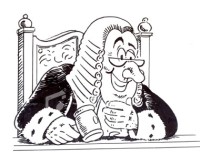 Judge: This is one of the worst crimes against decency and the British way of life I have come across in many a long year. To send out a message to the rest of these long-haired louts with their drugs and their free love I sentence them to one hundred and twenty hours of Max Bygraves. Take them away and play them the music!

So how do The Beatles fit into this rambling soliloquy? Well, I was still working at the Co-op (remember Heysham Village and torturing the delivery boy in a previous post?) I’d moved around a few times since then and was based at the big Co-op, Centenary House in Regent Road in Morecambe. It’s long gone; the building’s still there but it’s probably flats or a cash convertor now. I was a Beatles fanatic, I had all of their records (including the Beatles with Tony Sheridan EP, which wasn’t much cop) plus I was in The Beatles fan club so had all their fan club Christmas Records – in fact I still have a couple. Sadly, I think I can still remember the name of one of the women who ran the fan club – Bettina Rose – that shows how fanatical I was! At that time the release of a new Beatles LP was a big deal, especially after the records they had released over the previous couple of years – Rubber Soul, Revolver, Strawberry Fields Forever – so I was very excited about this. I had ordered my copy of Sergeant Peppers in the record department at Centenary House and seem to remember getting it the day before it was officially released (this may of course be total fantasy but I do remember it this way). Just holding it in my hands and looking at the sleeve was almost overwhelming –  nothing like this had ever been released before – gatefold sleeve, brilliants colours and to top it all off, an insert with cutout badges and things. I couldn’t wait to get home and play it.

There is something magical about LPs that doesn’t happen to the same extent with CDs (and of course is totally missing from downloads). It’s the tactile pleasure of holding it, taking it out of the cardboard sleeve, sliding it from the inner sleeve and looking at the label and that shiny black vinyl in which is imprinted all that (hopefully) fantastic music.

No time for tea when I got home, it was straight to THE SHED! to give it a first listen (of course with a cup of tea (three sugars) my mum had made for me). Then the ritual, open record player lid, lift and slide the arm which holds the records in place on the spindle, carefully place LP on deck – being careful to hold it by the edges so as not to damage the grooves – select correct speed, place stylus on run-in groove (wonderful sound of stylus hitting groove and straight into the first track. I LOVED IT!! I couldn’t believe the complexity and variety of the sounds. I thought it was the best thing I had ever heard and made everything else sound ordinary. Of course when it finished I played it again…… and again…. and again. I don’t know how many times I played it that evening, probably five or six. And I continued playing it every night for about six months. My family must have been sick of it; the neighbours must have been sick of it; even the shetland ponies in the back field must have been sick of it. But I LOVED IT!! (I think I’ve already said that).

So what about now? How do I feel about Sergeant Peppers in 2012. I still think there are some great songs on it – A Day in the Life (of course), Lucy in the Sky with Diamonds, Sergeant Peppers (both versions), but I certainly don’t think it’s the best thing I’ve ever heard, or even the best album by The Beatles. I would rather listen to Rubber Soul or A Hard Day’s Night (I think that one’s my favourite). But, whatever I think, Sergeant Peppers did change things. Music after it became more elaborate, more orchestral. There were more concept albums (not that there hadn’t been concept albums before but there were certainly more after) and even a cheeky parody in We’re Only in it for the Money by The Mothers of Invention (another album I really like). They opened up the possibilities for recorded music.

And it certainly had a huge influence on my life in the shed!