Dive Four – ‘You haven’t got a little bit of butter to go with that?’ 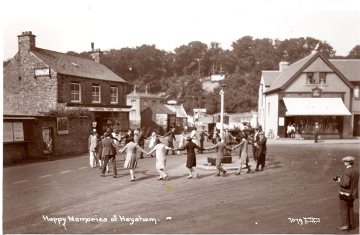 In 1966/7 I was working for the Co-op and I was sent to work in the Co-op grocery shop in Heysham Village for a couple of weeks while the manager was on holiday (that’s the co-op on the right with the blind). Steve, someone I’d know at primary school, was working there and we soon found that we had a lot in common (Mad magazine, music, torturing the delivery boy). But I mainly remembered him from the bus to school – he went to Balmoral Road, I went to Morecambe Grammar but we caught the same bus – where he had gained a bit of a reputation as a mad professor, inventing electric shock machines and devices to make dalek voices. He was also known as an expert bogey builder (bogeys are what we called carts made using old pram wheels with a rope for steering). Anyway, he invited me down to his cellar (all mad professors have to have a cellar, it’s one of the rules). This is where he played around with electronics and recording equipment and, as I was a fairly mediocre guitarist with aspirations and an occasional songwriter, the idea of being able to record my music was an exciting idea. He played me some of the things he’d been recording with someone called Dave Wynne.

What was exciting was that he was doing multitrack recording, this at a time when most albums were being recorded on just four tracks. As far as I remember he did it by having two tape recorders – recording a track onto one machine then playing this back and recording it onto the other machine while, at the same time, adding another live track. I’m sure he’ll correct me if this is wrong. The problem with writing about something that happened so long ago is that memories fade and get distorted (a bit like old tapes) and when, like me, you only have about seven brain cells left for one reason or another, they end up more faded and distorted than ever.

I eventually met Dave Wynne; he was a fairly peculiar looking person with a very pronounced chin and badly fitting false teeth which tended to slip when he was talking (or singing), meaning that his words were punctuated by clicks and clacks (reminds me of a Beefheart song). Sometimes, when he was singing, he’d take them out which added a certain gumminess to his singing. By the way, he’s not going to get upset about this description as he died quite a few years ago. He was a very accomplished guitarist and drummer and he had written hundreds of songs. I have to say that the quality varied wildly, from really good, well structured love songs (the one in the title of this post) to songs that made you cringe with embarrassment when he played them:
Lisa Rayne, Lisa Rayne
When will I ever see you again
Tomorrow won’t be soon enough for me.
This about a girl we knew at the local teachers’ training college with whom he was in love. He fell in love regularly, always to no avail.
By the way, in case you’re wondering why I headed this posts ‘You haven’t got a little bit of butter to go with that?’ it’s because Dave never had any money, or food, or cigarettes; we had a regular ritual in the late sixties of all gathering at my mum’s on a Thursday evening (I think it was) to watch Monty Python. Dave was always hungry and, after we had been there for a while, he would say to my mum, ‘I don’t suppose you’ve got a dry crust have bread I could have?’ Then, a little later, ‘You haven’t got a little bit of butter to go with that, have you?’, and so on until he would generally end up with a plate of egg and chips with bread and butter and a mug of tea. He was a born cadger but generally managed to get what he wanted.
So, to ‘Memories and Regret’. Of all the songs he wrote this was the best; it was well structured with a lovely melody, interesting chords and simple but affecting lyrics, reproduced here from memory:
There’s a sweet little garden,
Looking oh so neat,
With little fountains playing
Where we used to meet,
We would walk together
Through our private wonderland
We’d also walk along the shore
And picnic in the sand.
But things have changed between us now
We seldom ever meet,
I might pass you in a crowd
Or walking in the street,
And as I sit alone
Smoking my last cigarette
All I have is memories and regret.
The thing is, this song captures Dave Wynne perfectly; he was a sad, lonely man and the songs he wrote were, I think, his way of dealing with his life, a life of memories and regret.